The OptiMizer combines the best of slow feed netting with the convenience of a multi-bale feeder.

You can place an order directly with us or visit one of our distribution partners.

*Please note that prices set and charged by our distribution partners may vary.

The OptiMizer holds two small square bales of hay, up to 42″ long and 16″ square each. It can also be loaded with flakes from large square or round bales (up to 150 pounds of hay).

The manger is made from LLDPE, the same polymer used to make playground equipment, and has rounded or beveled corners to create safe and smooth edges. There are 12 holes on the bottom to ensure water drains out on any terrain. Slow feed netting is made from knotless nylon, proven to be durable yet gentle on your horses’ muzzles. It’s mounted on an assembly made from stainless steel. The netting is made in Canada and is supplied exclusively by Slow Feed Netting, the trusted and proven source of quality hay net products for horses. Netting is available in 2″ (standard) and 1.5″ sizes.

A slide arm at the top of the OptiMizer locks the netting into place over the hay. The net conforms to the shape of the hay, and horses slowly pull and eat hay through the mesh. Up to four horses can comfortably eat at the same time from an OptiMizer.

The OptiMizer measures 4′ by 4′ square. The legs can easily be removed to change the height from 22″ (no legs) to 37″ (with a height extension kit). When empty, the OptiMizer weighs about 100 pounds and has hand holds on two sides so it can be easily moved around the paddock or loaded into a vehicle.

The manger is made of  durable and lightweight Linear Low Density Polyethylene (LLDPE), the same material that playground equipment and drinking water tanks are made from, with a stainless steel assembly mounted inside.

All corners are rounded with 1″ diameters, making a smooth and safe surface if rubbed against.

The slide arm provides for smooth, one handed operation to open and close the feeder.

Slow feed netting hangs freely inside the feeder and conforms with the hay right to the bottom of the feeder.

The tiniest bits are the tastiest. With an OptiMizer, these delicate leaves aren’t lost to the ground but remain within the manger.

Ensure drainage on any terrain with 12 holes distributed around the base of the OptiMizer. 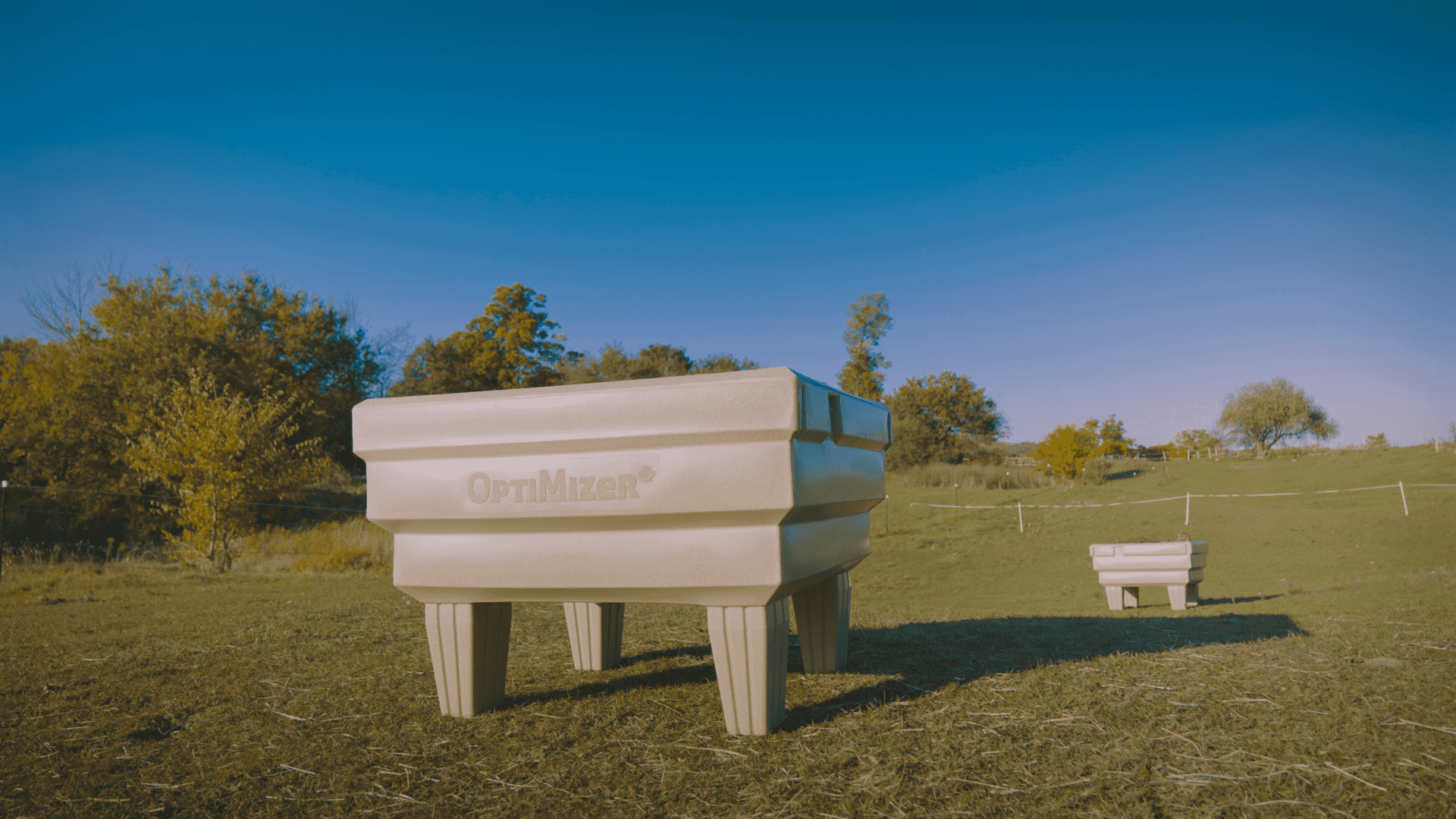 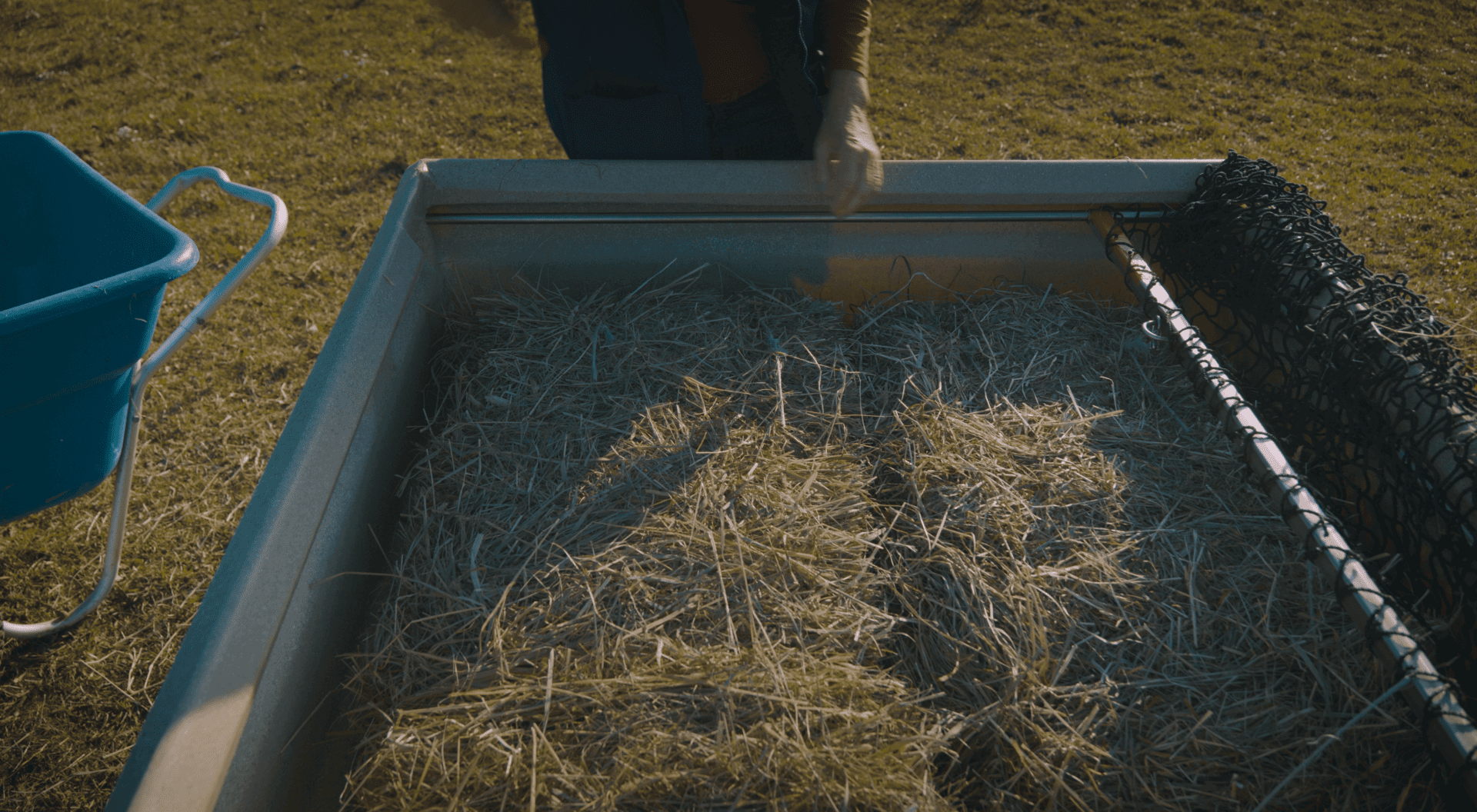 Place Your Order
See Our Distributors

Questions about the OptiMizer? Send us a message and we’ll be in touch soon!

My horse is a 17 year old, off-the-track thoroughbred who lives outside all year. She's a hard keeper, but by getting her the right amount of hay, whenever she wanted it, it was the first winter she didn't need an extra blanket or grain.

We use 3 OptiMizers for our herd of 8 horses. We fill them about once a day, even on the worst days, and have found ourselves going through a lot less hay. I'm confident our OptiMizers will pay for themselves in the amount of money we've saved in otherwise ruined hay.

I've always had slow feed bags. I needed five or six a day to feed three horses. Last winter with the OptiMizer I could slow feed two bales in one place. This saved me a ton of time not having to refill bags everyday, plus I noticed it was way cleaner in the spring.